For your consideration, here is a YouTube clip ( http://youtu.be/nT-vEPKWexg ) from a 1996 movie which has become a guilty pleasure of ours.  So many great things going on in this scene, from Jo's obsession, to Bill's confession, to Melissa's impression, all enhanced by Mark Mancina's musical score "Futility".  I played this particular track often during a road trip with James to the San Luis Valley a couple years back.  We had just met Ed Kramer from Industrial Light & Magic, who had created the computer-generated twisters in the movie, and I was wearing the promotional Twister pin he autographed for me.  Sometimes James would make us his "Twister Dinner" ( steak & eggs plus mashed potatoes and gravy ), from the scene in which the storm chasers crash Aunt Meg's. 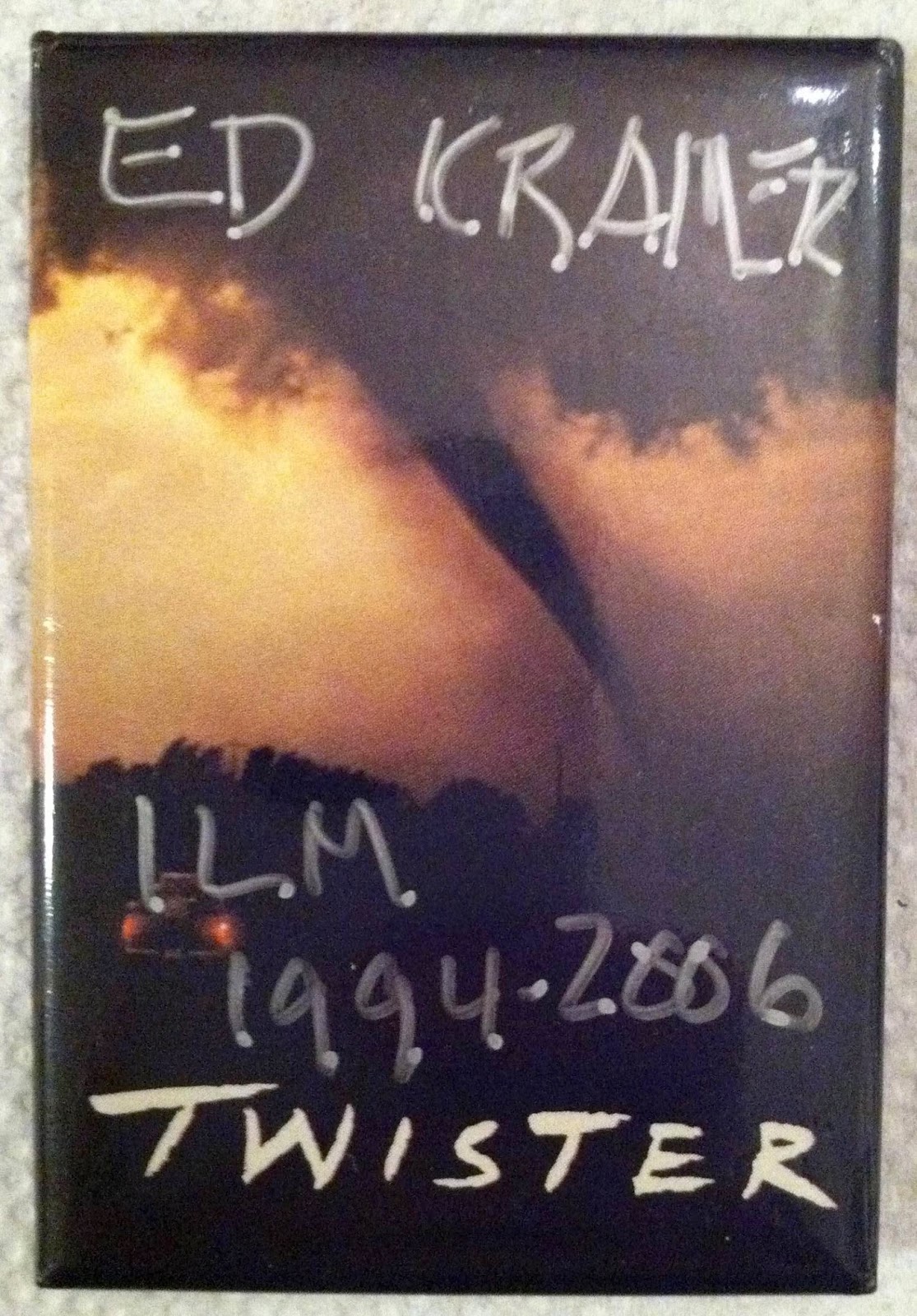 We had this meal just before our trip, though we weren't looking for tornados, but something equally fascinating.  The San Luis Valley is believed by many to be Colorado's primary paranormal hot spot.  I had been there many times, always investigating claims of UFO, cryptozoological, spirit activity, even buried treasure.  I went there for the first time on my honeymoon and stayed at the Great Sand Dunes Oasis in a little log cabin.  Fueled by Christopher O'Brien's books about the strange phenomena reported here, James went as Fox Mulder and I as Dana Scully, the X-Files soundtracks blaring the entire way.  On our next visit, after a summer peppered with severe storms and another viewing of Twister, I found that I identified with Jo and James with Bill.  We were SpiritChasers, and we met Christopher on this trip, my obsession with this area at an all-time high. 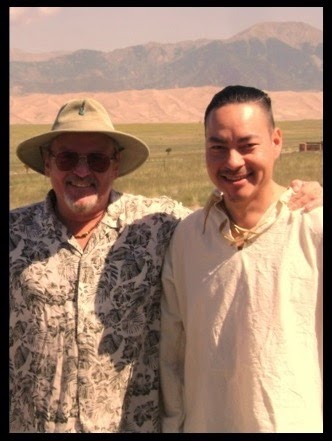 During a UFO skywatch near Zapata Falls, we and our friend Brett stepped away from the group of O'Brien's devotees to have our own experience outside of the collective tribal expectation.  I had seen an odd red spark shooting up out the top of a mountain, which others were soon claiming they could see.  Were we really seeing this or sharing a collective vision based on the reports of others who witnessed similar phenomena?  Always trying to think outside of the norm, I was granted the perception that what we were basically doing was taking.  As ghosthunters we are often guilty of this, accessing a scene and taking photos and sound recordings.  Though we leave the environment the same way we entered it and leave our blessings and prayers, we have taken so many fantastic peeks behind that infamous veil separating this world from the other.
I felt myself dissolving from the commotion of the skywatchers, from iPhones and GoPros, to a place in which I could enter the "house of spirit".  It's an exercise I do before any investigation, exiting from the distractions of the known world and tapping into the spirit, focusing our intention.  I observed that we weren't leaving or offering anything in return for this glimpse behind the veil.  At other investigations we have smudged the area, brought flowers for spirits who had crossed over, left holy water or gemstones.  I felt the same tinge of guilt after attending concerts, where, after being treated to an amazing performance, we dashed to the stage door for pictures and autographs with Erasure, Holy Ghost!, Laurie Anderson.  Taking without offering, a severe breach of etiquette for any Native Sioux. 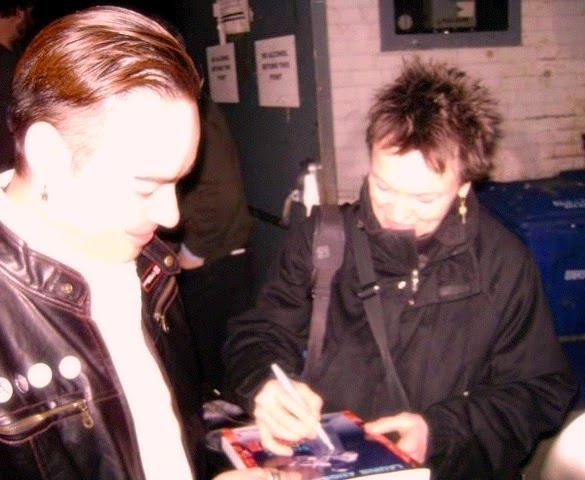 I wondered what in this case I could possibly offer to the great unknown, playing such a tantalizing game of hide and seek with us in the middle of the night.  Standing in pitch blackness, I began to notice the sensation of fear descending upon me like a cloud.  It was so dark and we were moving so far away from the safety of the group, their warmth and their humor and their noises and the missing out should something drastic happen in the skies above them.  Surely there were bears around, creatures foraging for tourist discards.  We heard coyotes howling earlier, bouncing off the mountainsides, duplicating their already numerous hungry calls.  A collage of images flipped through my mind, from redneck serial killers to aliens to simply the black enveloping darkness of the unknown, a separate entity of its own.  I focused hard at the mountain from which hundreds of hovering orbs had been seen by locals.  Its silhouette imposing and regal, a true king of mystery.  In that "house of spirit", I put forth a request, asking it what it would like from me.  It stared down at me through crags and rugged edges and I was certain it replied, "I'll take your fear".
I realized that more than anything in that moment I was clinging to my fear the tightest, so perhaps it's what this imagined mountain king thought my most cherished, valuable possession.  I held tightly to the fear of getting lost, of being eaten, killed or simply plucked from something out of the sky to be mutilated like the cows frequently found bloodless and missing organs in this area since the 70's.  How could I offer my fear, to project it, walk through it, release it?  I would have to approach this king with this intense feeling of dread, and by the time I was close enough to touch its jagged face I would be expected to let go of all I clung to, all the feeling the noises in the inky dark were intensifying.  I was not to expect or ask for anything in return.  No paranormal fireworks, no ghostly orbs, no infrared pictures of the otherworldly.  I was to give. 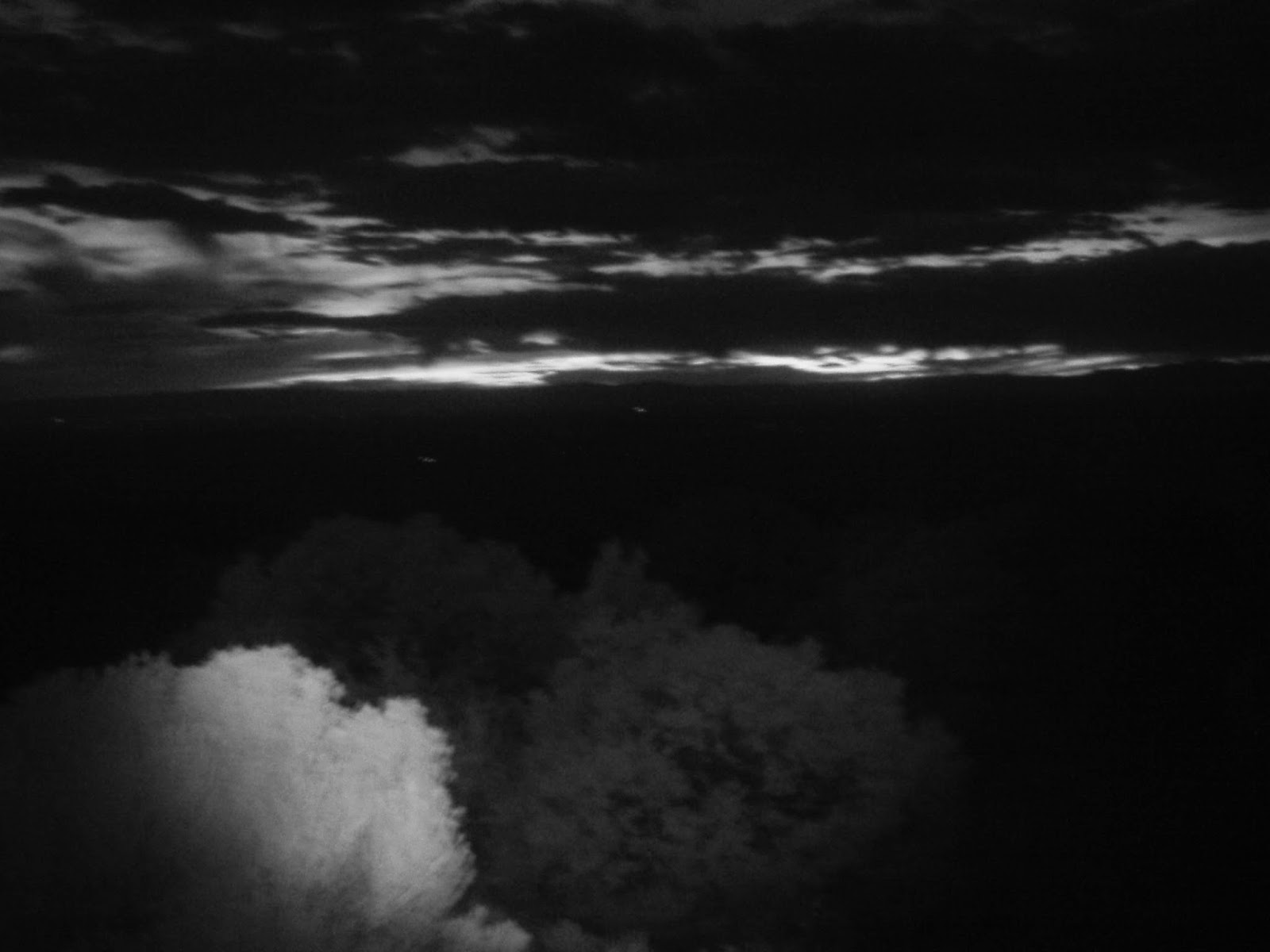 The path that James, Brett and I were on ended a half-mile away at the base of a 25-foot waterfall.  No one knew we had slipped away and no one knew where we were going.  My Spidey-senses tingled at the danger of such an excursion but my companions knew to trust my intuition and agreed to join me.  Brett lit the way for us and with each worrisome step into the unknown I reflected on possible scenarios should we encounter something much bigger and hungrier than us.  Wind howled, gravel crunched, branches snapped, leaves rustled and odd animal calls were all made by things we couldn't see as we made our way to the end of the path.
By the time we reached the river, the only way to the end was to wade in the icy waters, climb a slippery rock shelf and follow a cavernous route which very much resembled the Canyon Of The Crescent Moon from Indiana Jones And The Last Crusade.  There would be no lost temple of Petra at the end of this route, only a deafening waterfall, an angry giant which bellowed louder and louder the closer we approached.  Brett was forced to hold back, unable to negotiate such an aggressive torrent.  He waited by the water's edge as James and I continued onward, the beam from his flashlight quickly lost around a bend. 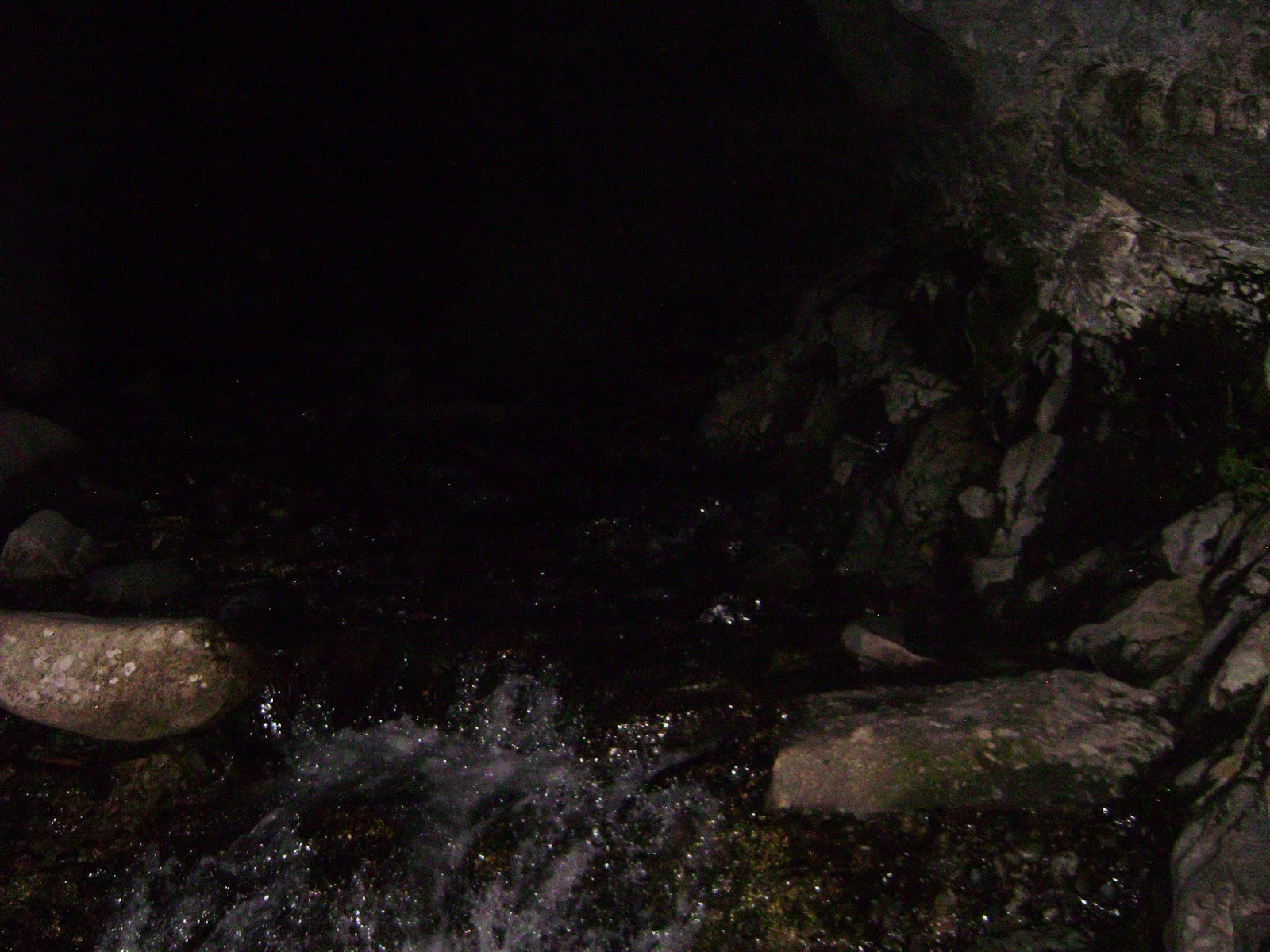 Bats clung to the rocks above us as we passed through the layers of mist shed by the falls.  The roar of the waterfall was tremendous and it was scary only being able to hear it, to feel its concussiveness, our feeble light unable to illuminate any of its magnificent, fearsome glory.  We had gone where I promised we would go, and in the presence of such a powerful force of nature, we could only kneel in a state of surrender to a larger power.  Sheets of invisible water cascaded around us like the gigantic robes of the rock king, the rocks cutting into our knees, and I had never felt so tiny, so without kinetics, so without influence.
I was expected now to offer up the fear I had been carrying.  The water was so cleansing after such an arduous hike, so purifying.  I let its moving walls claim my uncertainty and doubt, my worrisome, pessimistic nature, all of my taking and self-sabotage.  Waves of moisture and exhilaration moved about me as the thunder of the falls vibrated at my feet like a giant engine of respect and humility.  I realized then that I was smiling.  Half a mile away I had thought of the scariest thing I could do in that moment to prove my devotion, my worthiness, and now James and I stood under the rumbling conclusion of an invisible giant.  To enter the unknown is to enter fear, and fear a primal raft to the other side. 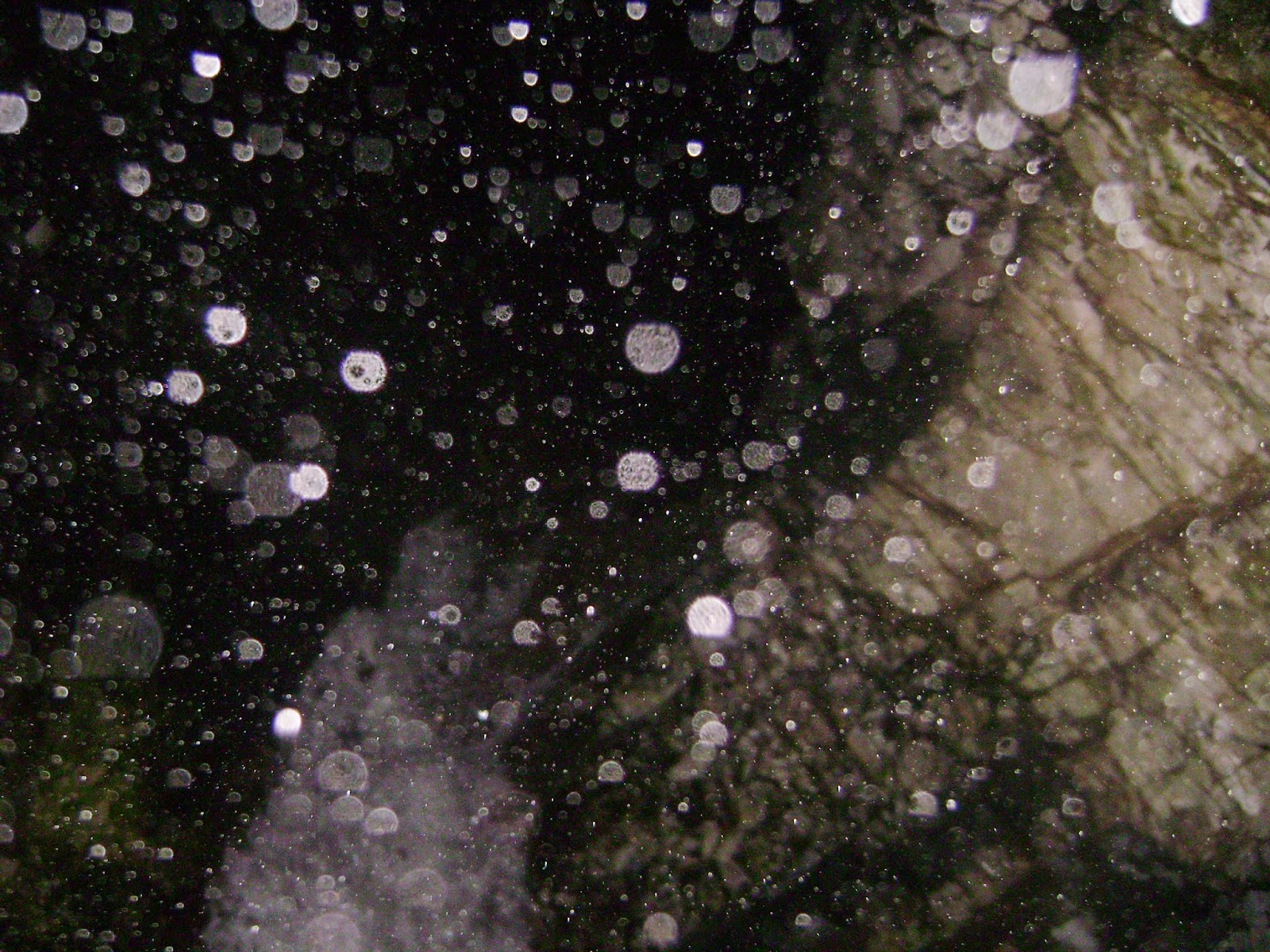 James and I looked at each other triumphantly, breathless and wet, both understanding what the greater and ultimate meaning of a spontaneous, spooky night hike proved to ourselves and to that which observes us while we are observing it.  As we walked back through the crescent cavern, the dark mouth that had swallowed our small forms, I was no longer able to distinguish the roaring and rumbling I felt outside from the pyroclastic feeling of empowerment I felt inside.  Although it was still pitch black I felt completely luminous, as if we had discovered a new way of seeing, an intuitive echolocation mirrored by the bats which swooped above us. 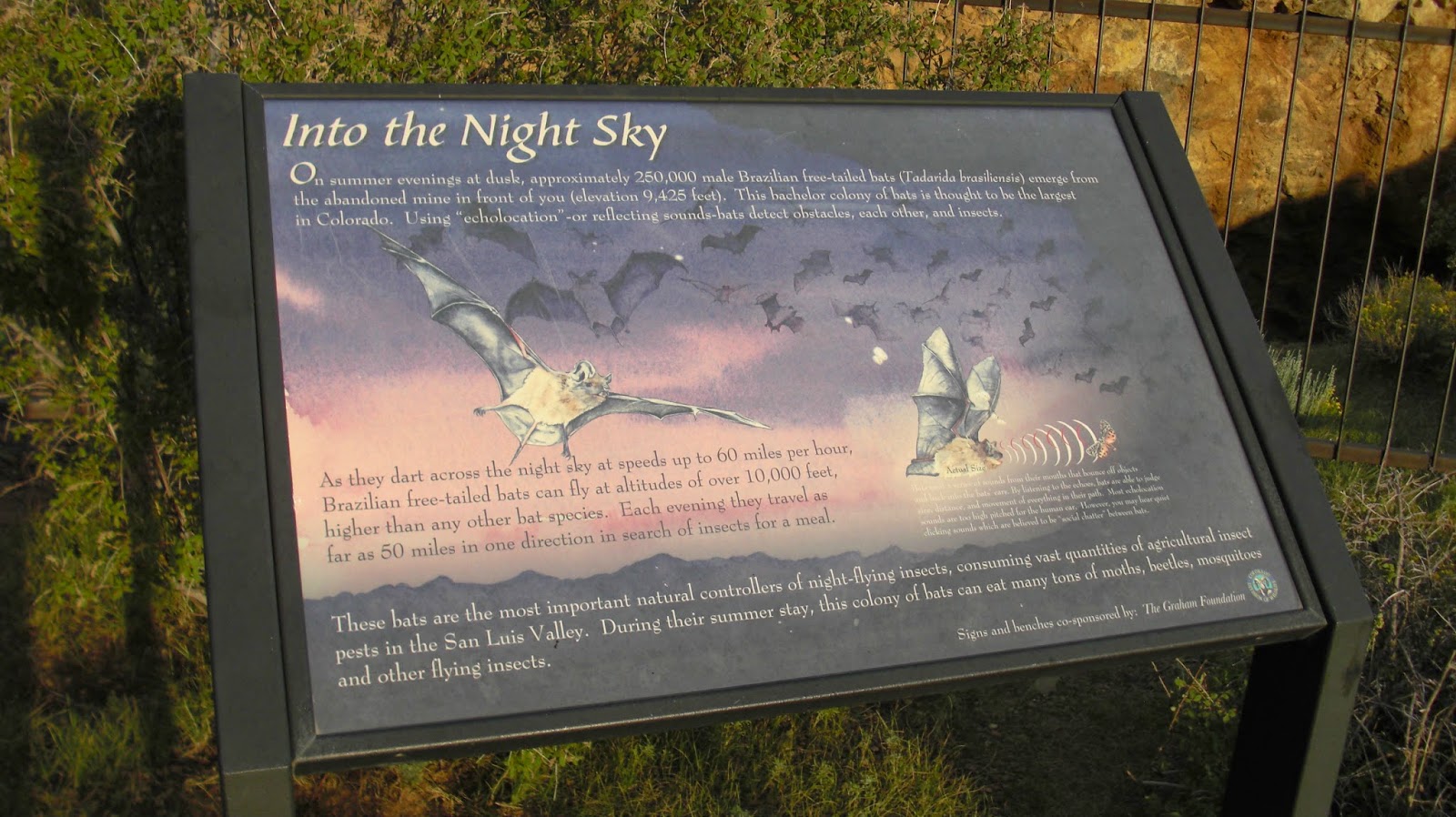 Stepping off the last rock ledge, Brett's flashlight beam once again visible, I held onto the side of the mountain for support, leaving my hand on its cold edge for as long as I could, transmitting my gratitude, my water for its water.  The following day we sat down near the Oasis for a private discussion with Christopher O'Brien, trading secrets like baseball cards, finding out about other places we might visit for more of the baffling and the bizarre.  I knew that wherever we went next, we could use a new sight because we had earned it, because we were willing.
There are invisible acts of power you engage in when you think no one is watching.  Whether you give something when no one is looking, say something to someone when you think no one else can hear, or stealthily lift something you have claimed as your own, there is in fact an observance taking place.  You might call it God, we might call it the Creator, some have simply understood it as the Great Unknown.  We engaged in something no one saw, into the realm of the unseen, an offering for Pele at the rim of Kilauea.  I always remember this night, during investigations where I am stepping into the darkness alone and find that I am generating my own light.  I think of a great night king I once visited whenever I enter the "house of spirit" and look at what I am clinging to the most, hoping for an audience with more staggering glory, reminding myself that I am not here to take.  I am here to kneel. 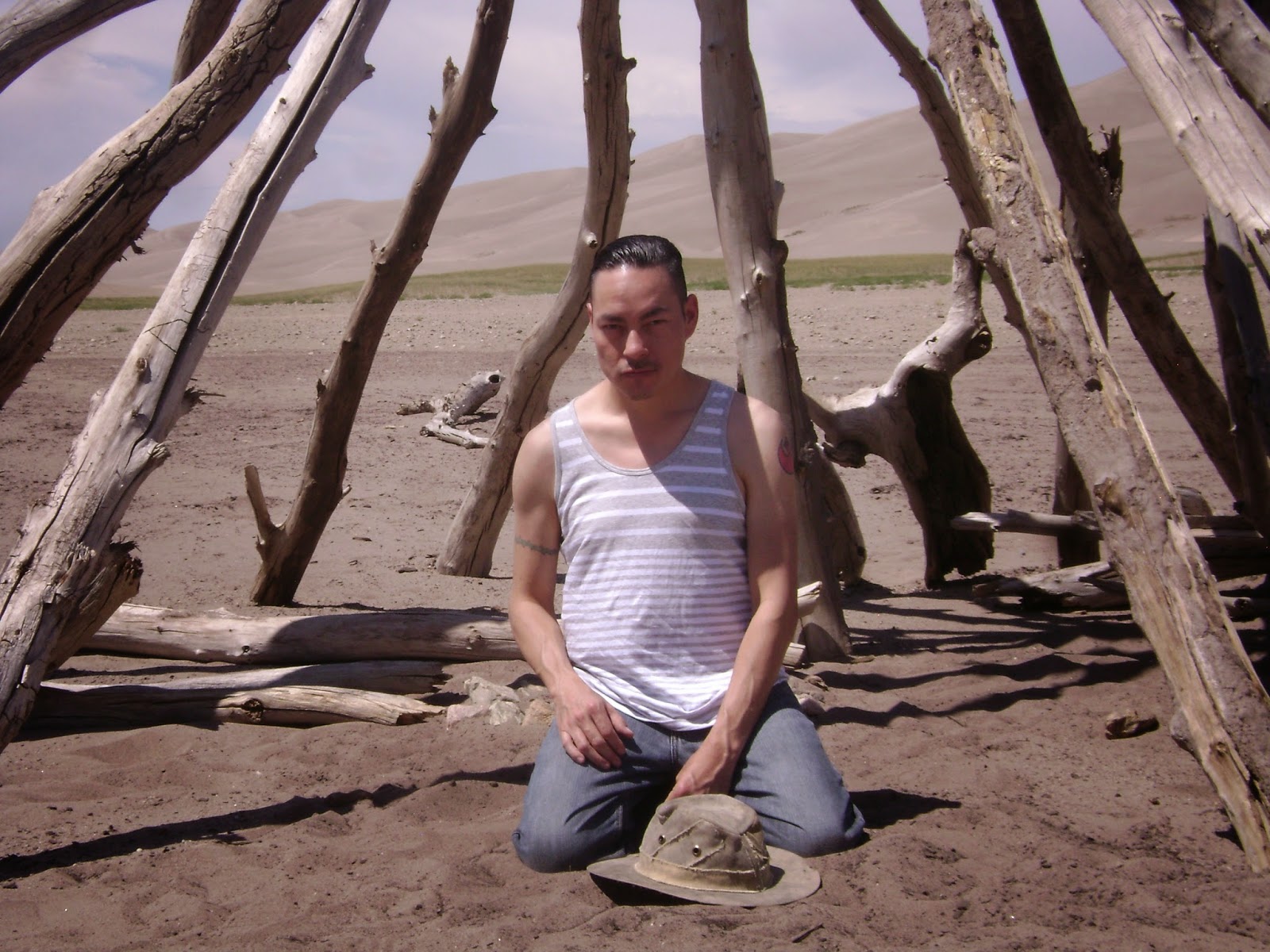