One of my best friends owns a theatre company here in the 'Springs and has been booking shows at the Colorado Springs City Auditorium for years.  Built in 1923, this historic venue has been host to the likes of Johnny Cash, Dolly Parton, the Harlem Globetrotters and many other legendary entertainers.  We've been to several of the musicals and plays our friend's held at the auditorium's Lon Chaney Theatre, dedicated to former 'Springs resident and infamous "man with a thousand faces" horror actor / director Lon Chaney.  Sometimes we'd help my friend move heavy props or help break down scenery after his shows.  He and a former business partner have had several mysterious experiences while working in the theatre alone and I always delighted in hearing the latest paranormal goings-on in the building.

His partner once saw an almost transparent woman in white descending one of the staircases, and it wasn't the first time they told me of this woman appearing to others on those particular steps.  Our friend often had the lights turned on and off on him when there was no one else around, chandeliers spun, and things had moved backstage on their own.  Doors had loudly shut by themselves, strange voices were heard under the stage, even an office manager had reported many unsettling experiences as she worked alone late at night.  On one of these occasions, with the auditorium empty and the doors locked up, she was sitting at her desk when she noticed a man peek around the doorframe and glare at her, then duck back into the dark hallway.  She immediately jumped up and ran into the hallway to find that no one was there.  This wasn't the last time she witnessed people who weren't supposed to be there, persons who had a tendency to disappear around corners while their footsteps could still be heard echoing down the long hallways.

In one of the rooms on the upper floor is an old, vacant apartment they say a former tenant had been murdered in. Parts of his mutilated body, including his head, were said to have been found strewn about the auditorium. Urban legend or not, many visitors to the auditorium were under the impression that the apartment was still occupied, as they could hear someone walking around inside, cabinets slamming, and an old radio playing.  There were also labyrinth areas under the main stage which led to tunnels under the city where we were informed another murder had taken place. A block away, one such tunnel ended at a former mortuary where paranormal phenomena had been reported on many occasions by many reputable people. This morgue had housed victims of the influenza outbreak of 1918, and employees there still report supernatural occurrences to this day.

In the upper seating above the main stage of the auditorium, the ghostly form of an unknown man has been witnessed sitting alone, observing the activity of others below.  In the years I worked for a popular metaphysical store in Old Colorado City, we promoted and participated as vendors in the popular new age fairs held at the "City Aud".  Working these fairs, which always ran through the weekend, I always got a kick out of observing the psychics giving readings there.  For sometime or another, inevitably, one of them would always turn and look up toward the seats above them, sensing the presence many before them have reported.  Many photographs taken there have come back with streaks of light and luminous orbs in them.  In one case, a child who'd performed at one of my friend's shows had one side of her head completely erased and replaced with a demonic looking face. 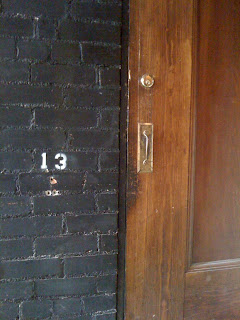 One evening, after one of my friend's performances, we were taking some props up to a storage area.  My roommate and I noticed a door with the number 13 stamped on it.  I tried to open it, thinking it was for storage, but found it locked.  Directly across from this door we found the proper room, but as we turned to enter it someone behind door number 13 pounded against it, nearly causing us to drop everything we were holding and run back down the stairs to safety.  At night, the dark rooms, cold stairwells and mysterious doors almost seem an entity unto themselves.  On another such occasion, my roommate and I were walking throughout the auditorium to ensure that all the patrons had left after my friend's musical had let out.  We had our digital camera with us as we had been photographing his show, and out of curiosity, we began snapping pictures at every purported paranormal hotspot we came to.  We began at the staircase to the right of the main entrance where the woman is usually seen, and noticed that several orbs were appearing in the viewfinder.  We sort of filed it away as dust or light reflections, but when we came to the dining area, after hearing someone speaking in the pitch dark, we photographed an ectoplasmic-looking orb coming right up out of a table. 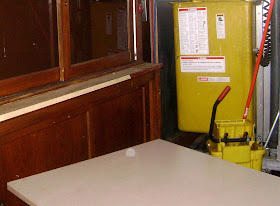 We went back to the main room of the auditorium and pointed our camera toward the upper seating area where the mysterious figure is often spotted sitting alone.  Looking at the viewscreen, we noticed a perfect orb hovering above this very spot.  Again, our logical mind attempting to explain it away as dust, we enlarged the picture on the LCD screen and were shocked to discover the nearly transparent form of a person seated there.  Appearing from another age entirely, he is holding a cane, his eyes, mouth and nose clearly visible, as he looks up to the ceiling.  We still have the only known photograph of this infamous entity, and were obviously grateful he chose to appear to us.  We continued to explore, taking a photo of the seat, an orb appearing right at its center.  We went up a little higher, and I sat myself down on one of the seats while my roommate snapped a picture of me.  The photo came back with several orbs surrounding me, including a very luminous, ectoplasmic one to my right and one pancaked with another streaking down to my left!  Four appear on the chair beside me, and a tiny one looks as if it's entering my forehead. 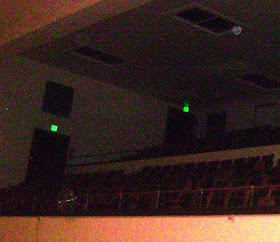 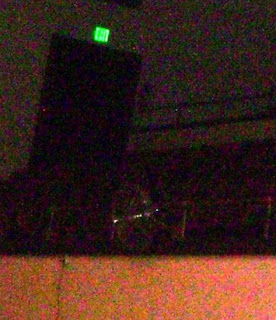 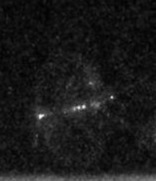 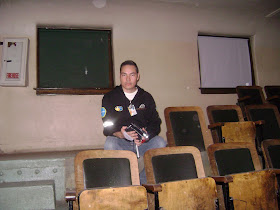 My friend still has shows there, and last October we had one of our own.  My roommate and I founded our own paranormal group in 2006 after our first strange experiences inside the City Auditorium.  We created a short film to use as a DVD invite to a Halloween party we were hosting, based on late-night infomercials and public access shows.  We called the program, and ourselves, The SpiritChasers, having a lighthearted, human approach to the unknown.  All the good ghosthunting names were taken by then, and we never expected anyone to take us seriously anyway.  We never expected that in filming material for our show, we would actually capture images of spirit activity at the 'Aud and elsewhere.  The evidence we captured became more and more dramatic, and so unmistakable, that we were eventually flown out to L.A. to appear on two episodes of the Biography Channel's "My Ghost Story".  The producers liked our original take on the paranormal, having seen the culmination of the yearly SpiritChasers Halloween specials we'd been releasing since 2007.

In 2011, we held our SpiritChasers V premier at The Lon Chaney Theatre.  Apart from our small audience of friends, family and a couple staff members, the auditorium was empty.  One of our guests went to use the restroom after the show, walking down one of the long hallways unaccompanied.  He came to the restroom, standing alone, when he began to sense a very strong presence of someone standing behind him.  He turned his head to look, finding no one there of course, but was unable to explain who was it he could still hear breathing...


- Christopher Allen Brewer, May 2012
www.thespiritchasers.com
epicanthus at 12:10 AM
Share